Is taping effective for the treatment of knee pain? 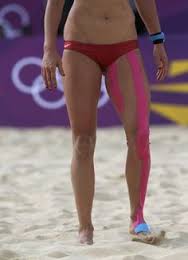 Physiotherapist at our Newmarket location Aurelie Kelly writes about:

Which Is More Effective for the Treatment of Anterior Knee Pain; Kinesio or McConnell taping?

Anterior knee pain (pain at the front of the knee) affects 25% of adults and its prevalence has been rising in the past 20 years.

One cause of anterior knee pain is patellofemoral pain syndrome (PFPS). Patients typically report anterior knee pain during functional activities such as stair climbing and squatting which impacts on mobility and quality of life.

Physiotherapy being a conservative treatment, is usually the first line of treatment. Two taping techniques that are commonly used in rehab are the McConnell Taping Technique (MT) and Kinesio Taping (KT).

MT is a rigid tape that is structurally supportive and restricts movement. It is thought to balance the pulling force on the knee cap, improve joint alignment and facilitate the vastus medialis oblique (VMO). Recent studies have also reported that MT improves proprioception (the body’s ability to detect changes in joint position and movement).

KT is a relatively new taping technique that gained popularity in the 2008 Beijing Olympic Games among its athletes. It is a brightly coloured elastic tape that is able to stretch `130-140% of its length allowing the wearer to move, unlike its MT predecessor. Similar to MT tape, KT tape is thought to improve proprioception and joint alignment as well as encourage muscle function and relieve pain.

In a recent study, 15 females and 5 males with anterior knee pain were asked to perform 2 tasks: 1) a squat while lifting a box that was 10% body weight and 2) ascend and descend 16 steps under three conditions; 1) no tape 2) MT and 3) KT. They were then asked to rate their pain levels using the 0-10 Numeric Pain Intensity Scale before and during the activity. Values on the pain scale were graded as follows 1-3 mild, 4-6 moderate and 7-10 severe.

Results showed that during the squatting activity, KT and MT were no more effective than no tape. However, the authors note that the load may have been too light to see a difference. However during the stair climbing, both MT and KT were equally effective in decreasing pain when compared to the no tape condition.

One explanation for the pain relief effects of taping is that taping over skin could stimulate receptors on the skin increasing feedback to the central nervous system. Further investigation is needed to determine the exact mechanisms for pain relief.

This study has several limitations which include small patient sample size, gender bias, the relatively young age of the participants and as mentioned previously insufficient lift load during the squatting task.

Nevertheless, the study suggests that both KT and MT are equally effective treatment options for anterior knee pain. Given that KT can be worn for 3-5 days as opposed to 18 hours for MT and that KT is usually significantly more expensive to purchase, it is up to the wearer’s discretion as to whether the more frequent application of MT is worth the cost savings in the long run.

Our Team
Frequently Asked Questions
What is Physiotherapy
​​